Four billion people have the internet and 3.5 billion of those users log on daily for an average of six and a half hours2. It’s a global opportunity that must be seized locally. Businesses can become students of local shopping habits, local payment methods and trends in each unique market, to reach consumers across borders.

The Top 10 Markets for Cross-Border eCommerce

These ten cross-border ecommerce markets we’re ranked based on how many shoppers recently made online purchases from abroad. 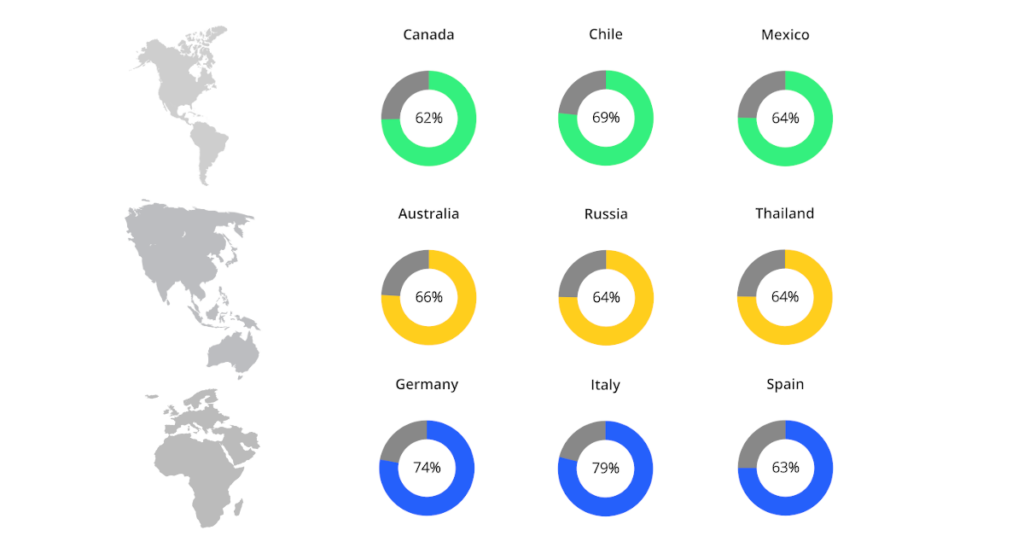 In Italy, 79% of online shoppers said they purchased something from an overseas retailer in the past six months, according to the Global Connected Commerce Report2. Paypers data suggests Italians shop mostly from the UK and Germany for goods they can’t source in the domestic market3.

India’s ecommerce market is expected to grow to US$200bn by 2026, rising from U.S. $8.5 billion in 2017, according to the Indian Brand Equity Foundation4. A boom in internet and smartphone usage is helping the industry. Almost 75% of Indians bought a product from overseas in the previous six months.

Germany is a powerhouse of the European economy. When Cross-Border Commerce Europe5 recently analyzed ecommerce trends, it found fashion retailer Zalando, music store Thomann, and bike store Bikester to be the most popular for cross-border purchases in Germany.

In Chile, the ecommerce market is earmarked for growth of 140% by 2022, according to Americas Market Intelligence (AMI)6. The Santiago Chamber of Commerce claims the country is the eighth globally, for the percentage of shoppers who buy goods online across borders. eCommerce titans play a large role, with Chileans able to order products internationally from sites like Alibaba and Amazon.

A striking 40% of Australian shoppers’ most recent purchases came from China, according to data from the International Post Corporation (IPC)7. The other countries in the top five list of source countries for online purchases include the United States (21%), UK (14%), Hong Kong (6%), and New Zealand (3%). Fashion, consumer electronics, and health and beauty products were the leading product categories.

The International Trade Administration (ITA) has earmarked Thailand as a rapidly evolving cross-border commerce market. The Thai government is also investing significant amounts in digitization, funding programs such as PromptPay, which lets Thai shoppers pay for products using only their mobile phones or citizen IDs.

Nielsen’s data shows that almost 65% of Mexican shoppers bought something online from overseas2 in the previous six months. Unsurprisingly, as Paypers statistics suggest8, the US is the top source destination for these kinds of purchases, followed by China and Hong Kong.

As the UK’s Interactive Media in Retail Group (IMRG)9 notes, Russians can favor spending instead of saving, owing to low trust in banks following past financial crises. In 2014, IMD estimated there were around 31 million online shoppers in Russia. Total ecommerce sales that year were U.S. $17 billion, with almost a third of these sales transacted across borders.

In 2018, the IPC’s Cross Border eCommerce Shopper Survey10 revealed the top three source countries of overseas purchases by Spaniards: China, the UK, and Germany. According to Paypers, home furnishings are a popular cross-border purchase, followed by clothes and footwear.

It probably comes as no surprise that 53 percent of cross-border digital buyers in Canada bought goods from the US, vastly more than China (30%) and the UK (4%). Interestingly, Canadians reportedly reserve bigger ticket purchases for domestic retailers, while reserving cross-border purchases for lower cost items11.

Businesses need to adopt a local-commerce mindset that respects and serves each individual market. As Nielsen recognizes, ineffective customer relationship management, processing, payment and fulfillment systems can all be major barriers to success. Making the effort to localize payments for each market can involve significant resource commitments, but the payoffs are undoubtedly worth it.

Download European Country Payment Trends and Opportunities, to learn how to localize your payment options across countries including France, Germany, Italy, Russia and Spain.

Download Latin America Payment Trends and Opportunities to learn about ecommerce and local payments in countries like Brazil, Chile and Mexico.

How Digital Wallets in Europe are Reshaping Payments

How to Reduce the Costs of International Money Transfers